"And remind, for indeed, the reminder benefits the believers."
(Al-Quran 51:55)

Sunnahs of the Night

In the Name of Allah, Most Gracious, Most Merciful

A Sunnah is an action that was carried out by the Prophet Muhammad (saw). As Muslims, he is our role model in all aspects of life therefore we try to follow his ways in even the minutest detail.

Allah says in the Quran:

Say, (O Muhammad), "If you should love Allah, then follow me, so Allah will love you and forgive your sins, and Allah is Forgiving, the Merciful.
(Surah Aale-Imran)

The following are the Sunnah practices of the night:

1. To recite Bismillah while closing and locking the doors of the house.

2. Open food and water should be covered with the recitation of Bismillah. A stick could also be used to cover but Bismillah should be read.

3. To put out any burning fire.

4. To switch off or put out anything which may catch alight, if left on like a candle.

5. To discuss with members of the household matters relating to Islam, for example, telling stories about the Sahabah (ra).

6. When children reach the age of 9 or 10 years, the beds of females should be separated from that of the males.

8. To lay or spread the bedding by yourself.

9. To dust the bed before sleeping.

10. To make miswaak even though one has already made miswaak for the Isha salah.

11. Before sleeping, recite with Bismillah each time:
Surah Al-Ikhlas
Surah Al-Falaq
Surah An-Nas
and thereafter blow on the palms which should be rubbed 3 times on ones entire body - beginning from the head and ending at the toes.

12. To use pillows to rest ones head on. The Prophet Muhammad's (saw) pillow was made of leather and filled with date palm leaves.

13. To use leather and hide as bedding for sleeping.

Note - sleeping on any of the above with the intention of Sunnah shall merit reward.

19. The Prophet (saw) prohibited lying downwards on the stomach.

20. The Prophet (saw) also prohibited lying flat on the back with one leg on the other. (If there is no fear of exposing the private parts then it is permissible to lie down in this manner).

21. To sleep on the right side, facing towards the Qibla.

22. To sleep with the right hand under the head and with the knees bent.

23. To recite the following duas when one lies down: 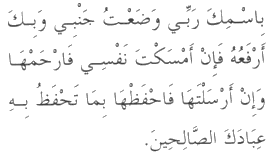 In Your name I have laid my side and with Your help I shall rise. If You withhold my life then forgive it and if You send it back then protect it as You would protect Your pious servants.

24. To recite the following Istighfaar 3 times:

I seek forgiveness from Allah besides whom there is none worthy of worship, the Living, the Sustainer (of life) and to Him I repent.

25. To recite any Surah from the Quran that one remembers especially Surah Al-Mulk, Surah As-Sajdah and Surah Yaseen.

26. Reciting of Surah Al-Waqiah before sleeping safeguards one from hunger and poverty.

27. To sleep in a state of purity i.e. wudhu and ghusl (if necessary). If one has done wudhu before sleeping, then it would not be necessary to repeat it.

29. To keep the prayer mat for the Tahajjud prayer besides the head before sleeping.

30. If one experiences a good dream and wishes to relate it to somebody then he should relate it to a learned and compassionate person so that it is interpreted correctly.

31. After a nightmare, one should recite once:

I seek protection with Allah from the accursed Shaytan.

and spit or blow on the left side 3 times. One should change the position that one was sleeping in, and should not mention such dreams to anyone, and inshallah, no harm shall come to that person.

32. To have water and miswaak ready in advance for wudhu.

33. To sleep with the intention of getting up for the Tahujjad prayer.

34. To read the Tahujjad prayer before the Fajr prayer.

35. Our Prophet Muhammad (saw) used to read such long rakaats for Tahajjud that his blessed feet became swollen. Whilst recting Quran in salah, he used to cry a lot due to which a sound used to come from his chest as if a pot of water is boiling. This was due to his fear of Allah.

36. For Tahajjud, pray at least 2 rakats and a maximun of 12 rakaats. This is the Sunnah. However, there is no limit for Nafl prayers. As many rakats can be prayed. One may also do Zikr, Tilawah and it is also permissible to sleep, provided that the Fajr prayer is not missed.

37. Zaid bin Thabit (ra) complained to the Prophet Muhammad (saw) about his sleepless nights. The Prophet (saw) advised him to read the following dua:

May Allah give us all the ability to follow the Sunnah whenever the night falls - Ameen!

Posted by This Muslim Girl Bakes at 04:58