"And remind, for indeed, the reminder benefits the believers."
(Al-Quran 51:55)

In the Name of Allah, Most Gracious, Most Merciful 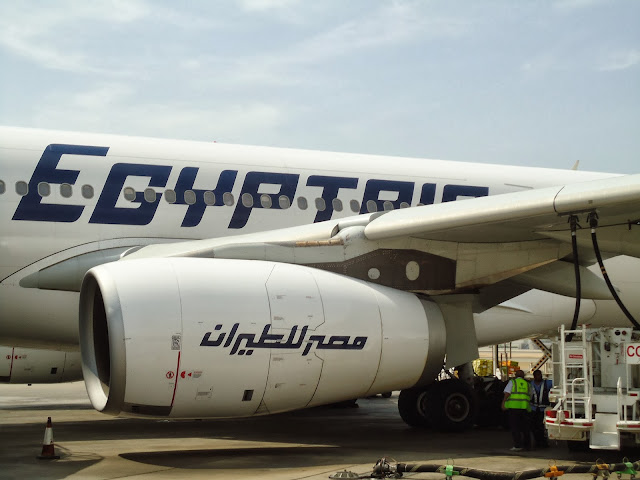 Seeing the Haajis in Makkah completing their Hajj this year brings back so many memories of my own journey last year. Alhamdulillah, Allah blessed me and my parents with the honour of visiting His House and performing the blessed Hajj pilgrimage, and He, the Most Merciful, helped us in ways you can never imagine. This is the plane that brought us, with the will of Allah, to the blessed land of Arabia. May Allah take us all there again and again - Ameen! 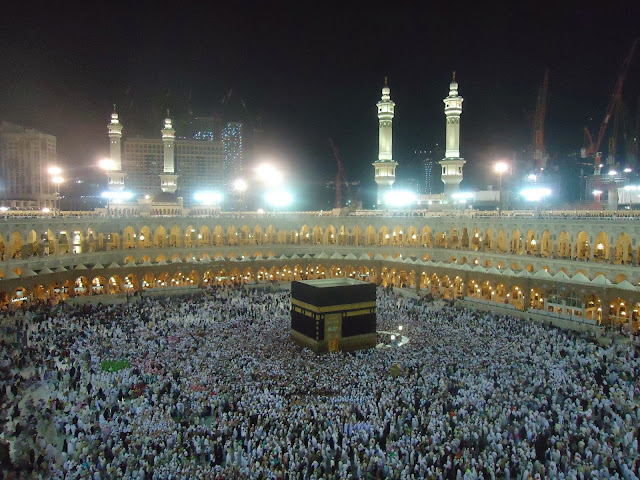 The first stop was Masjidul Haram in Makkah. This is where the House of Allah - the Kaabah stands. Built by the Prophet Ibrahim (as) and his son, it has been a blessed place on earth for thousands of years. 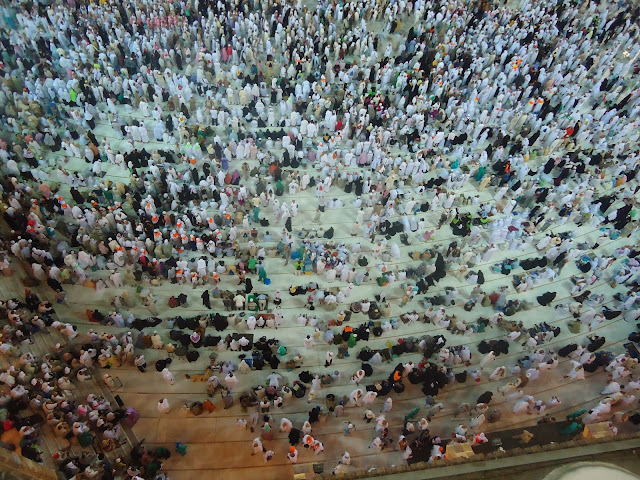 The Hajj journey was a snapshot of the entire world. Walking through the crowded mosques, we heard languages and saw faces from all over the world. A clear proof of the spectrum of the Islamic faith - a universal faith that there is only One God - Allah. 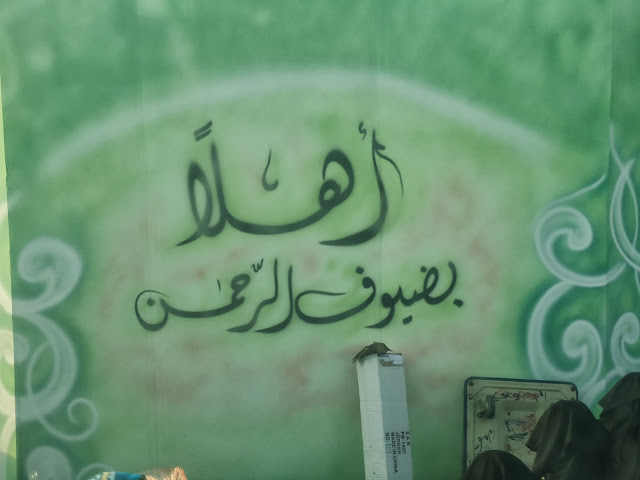 This was one of the many wall paintings which greeted us on arrival at Mina. It means "Welcome to the guests of Ar-Rahmaan". It completely sums up the hospitality of the people of Arabia during the Hajj season. They treat every single person as the guest of Allah. The amount of times our coaches stopped at checkpoints on the way, and we were handed so many free drinks, food and other goodies. May Allah reward the people of Arabia for their immense hospitality throughout the Hajj season and other months of the year - Ameen. We can only pray for them but their true reward lies only with You, O Allah! 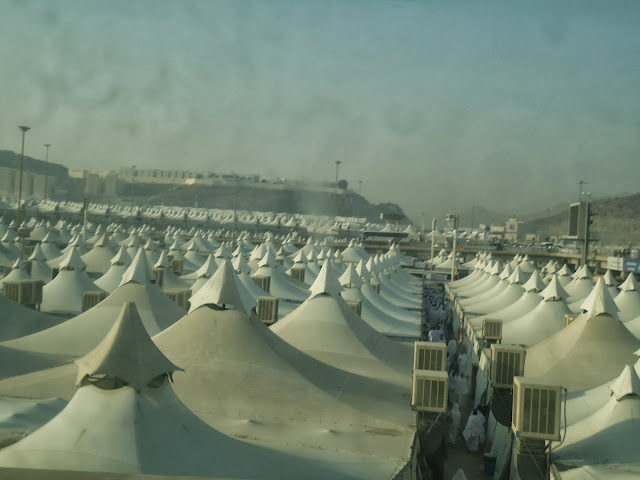 The first stop for us as pilgrims was Mina - the tent city! And it really is a city, in fact it felt as though the whole world had gathered in one place. Each country had its own area, and within those areas were streets and alleys where all the different Hajj groups had their tents. That first day spent in Mina was the time to begin our prayers and contemplate on the huge journey ahead. 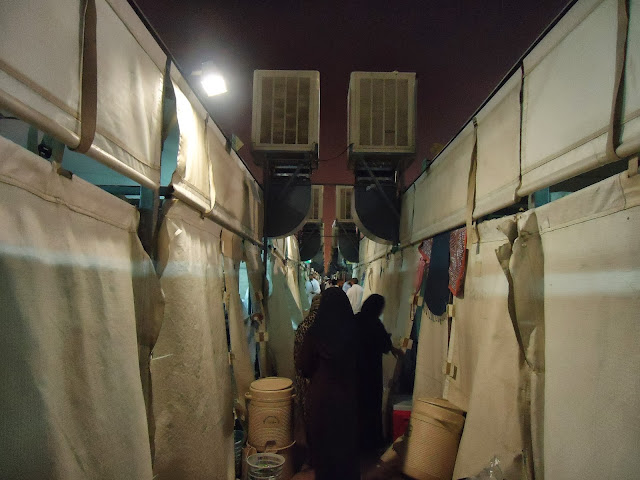 As night fell on that first day in Mina, there were many speakers giving talks about Hajj in all the tents. You could hear many different voices and languages ringing out as we walked in between the little alleys. We were quite lucky in that the nasheed artist, Junaid Jamshed gave a talk in our tent. He said something which kept me going throughout the entire Hajj journey, and still resonates with me today.
He said, "This Hajj is a strange worship. You perform many rituals, and they may seem strange to non-Muslims, but you do them because it is the command of Allah.
This is the same with life.
Some of the commands of Allah may not make sense to you, but you do them because Allah has commanded you to.
In the end, you will definitely see the beautiful wisdom behind each and every command of Allah". 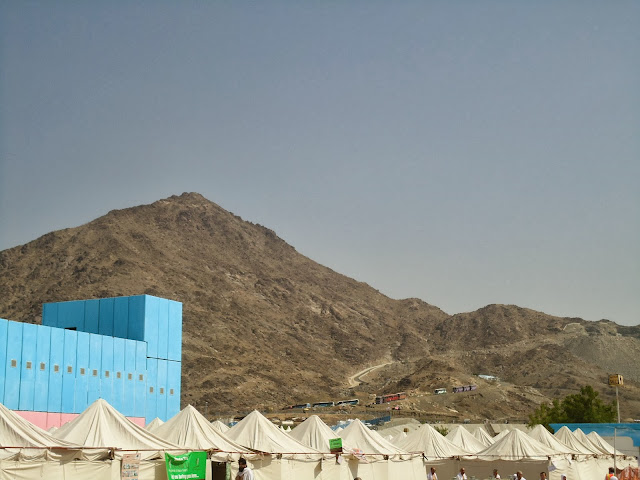 The next morning, after Fajr, we set off for Arafah. Subhanallah! What a place! A huge open piece of land, surrounded by mountains, and dotted with tents. A day of praying and repenting awaited us - this is Hajj - Hajj is Arafah. 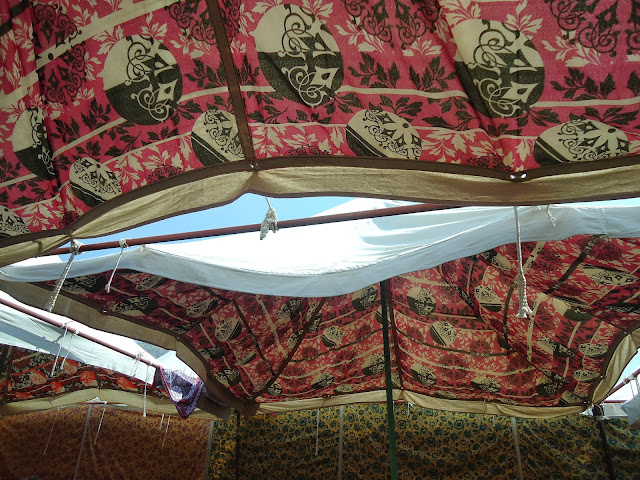 The tents in Arafah were temporary and were just pieces of cloth tied to poles for the roof, and rugs on the floor. A glimpse into the lives of the Bedouin Arabs who live their lives in tents in the desert, moving from place to place in search of water.
As the Day of Arafah went on, the praying intensified. All around on the loudspeakers , were voices crying out to Allah, begging for His forgiveness and repenting for a life full of sin. 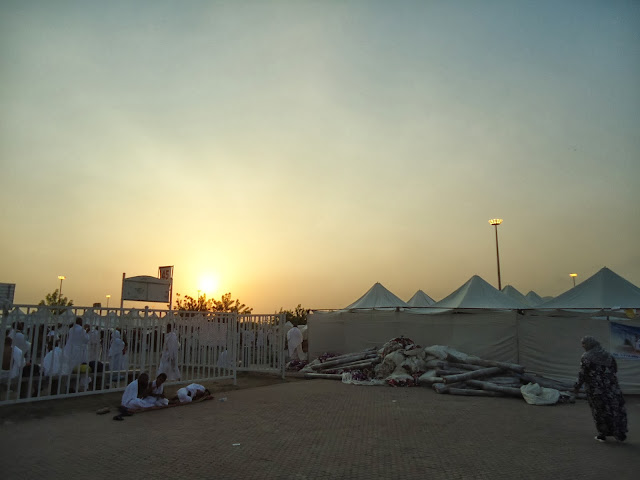 As sunset approached in Arafah, the prayers became more intense. We stood out on the open plains, arms raised up to the heavens, weeping and crying to Allah, and begging Him to forgive us. Anticipating that when the sun set, and we left for Muzdalifah, we would leave forgiven and free of sin like newborn babies.
But for now, Arafah was our world, and we stood in front of Him, begging. 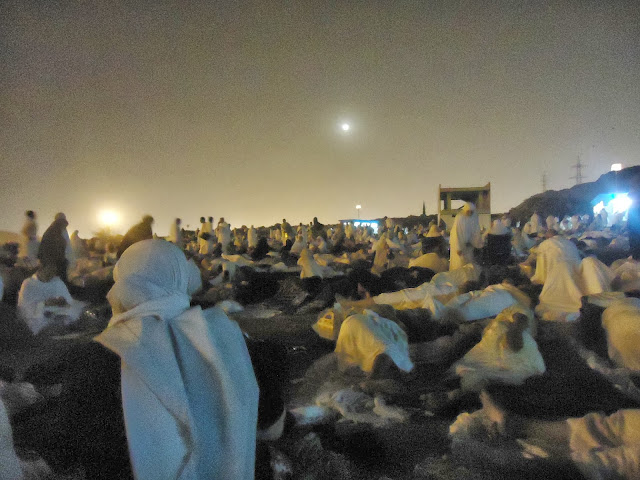 The night was spent under the moon in Muzdalifah. After a day of repentance under the hot Arabian sun, the coolness of the night was quite welcome. Many of the Hujjaj slept, resting their weary bodies but many more were awake, praising their Lord for His Mercy at Arafah, and marvelling at the sea of humanity in front of them, which spread out as far as the eye could see. 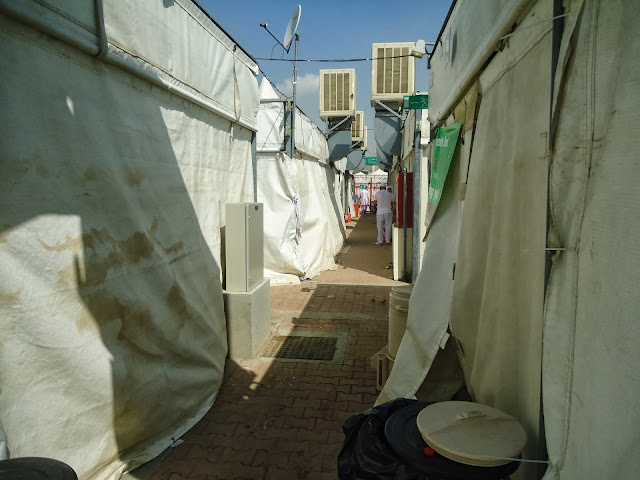 After spending the night in Muzdalifah, we left after Fajr, and started the long walk back to Mina. The sun rose as we walked, and all I could hear around me was the footsteps of all the Hujjaj, all heading in the same direction. It reminded me of the scene of the Day of Judgement which has been described in the Quran. How on that day, all that will be heard is the sound of footsteps as people walk to the Plain of Reckoning. 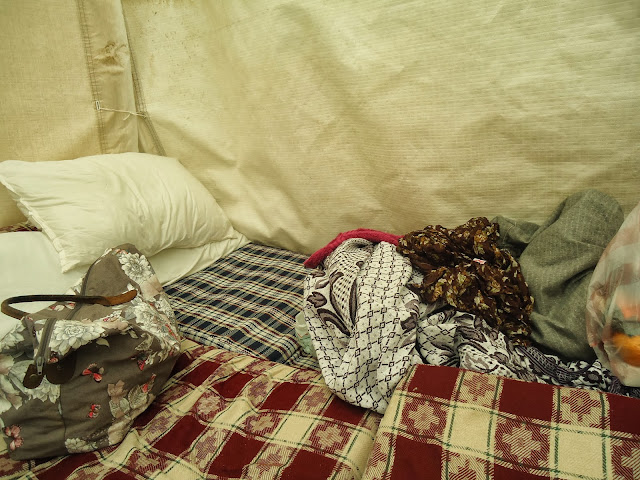 We finally reached Mina around mid-morning after getting quite lost among all the white tents. It was then time for a well earned rest before our next step in the journey. Little did we know that today was the day of Eid-ul-Adha! 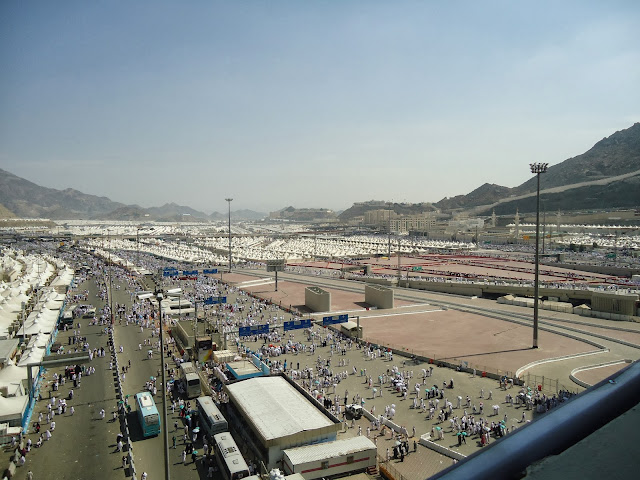 After a few hours rest in Mina, we walked all the way to the Jamaraat Bridge. Today we would pelt one pillar representing the Shaytaan, and within the next two days, we would return twice to pelt all three. 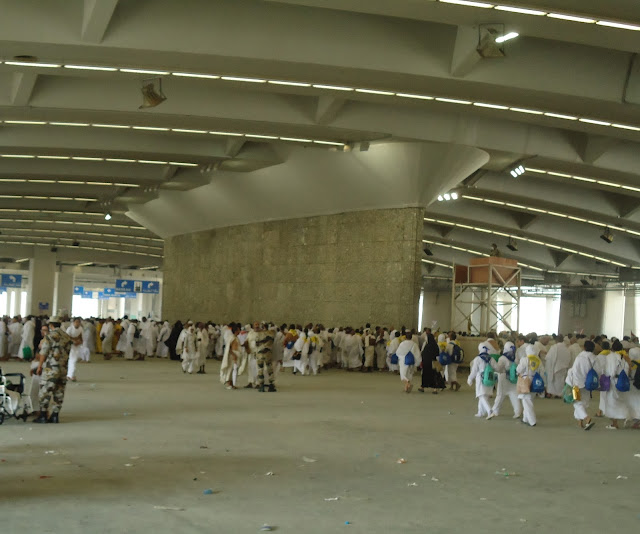 The sight of people getting their entire lives worth of anger out at the Shaytaan was just indescribable. When we left the bridge, a huge weight felt like it had been lifted from our shoulders. 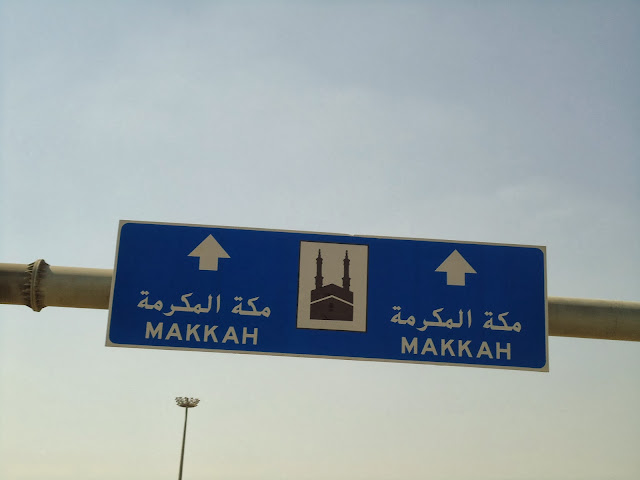 May Allah accept our Hajj, and accept the Hajj of all the Muslims who have ever performed it, and take us again and again to the Holy Cities of Makkah and Madinah - Ameen!

(All photos were taken by me)

Posted by This Muslim Girl Bakes at 10:58